Who is Angelo? Meet the owner of Angelo’s Cleaning: Angelo Pagnotti

By the time I turned 19, I had lived in 19 different places and went to 4 different high schools. Mostly living in Scranton, Pa and Pensacola Florida I settled in the King of Prussia, Pa area since about 1982. 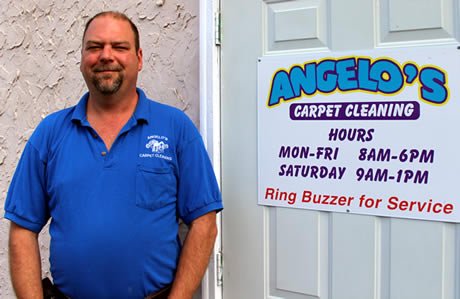 Prior to starting Angelo’s cleaning, I was working as an assistant manager for Roy Roger’s fast food restaurant which was owned by Marriott, I worked mostly nights and weekends. This was around 1988. My wife Beth was cleaning houses, she was very busy and had ask me several times to quit my job and help her clean houses. Eventually I agreed. I still remember the feeling of freedom and finally being in control of my own destination. It’s an absolutely amazing feeling and scary also. We cleaned houses together for about a year when I said we have to do something heavier. After some thought with many different business ideas, one of our customers that we were cleaning their house had been cleaning his own carpet for some time but now he was older and asked if I would clean his carpet I agreed, at the completion of that job I knew that this was what I wanted to do, clean carpets. It turns out all the carpet were made out of wool, not exactly what you want to start with, but because he had already been cleaning them I felt safe. The feeling of cleaning something dirty and the joy that it brings to people is what drives me in this business. From that point on we slowly got out of house cleaning and evolved into a carpet cleaning service.

I met Beth when she had just turned 16 and I had just turned 18 years old. I was working at Denny’s as a cook and was living with my manager Marc, as my parents and I decided to part ways for a while. One day when I came into work, I saw Beth sitting there waiting for an interview. I turned to Marc and asked who that was, he made some type of derogatory comment, that’s the way he was, and I said to him that I was going to marry her. That was the only time I ever thought or mention this to anyone until years later.  We did wind up getting married and sometime later I remember that I had told Marc I was going to marry her. I had never mentioned this to Beth, I felt that she would be scared off by such a predetermined thought, I had put it out of my head. When I remembered, I told her what I had told Marc, who verified that I had made the statement. I’m glad I remembered when I did, he later died from cancer. This was really a life love at first sight and we have been married for over 30 years with 2 kids and 1 granddaughter.

Our relationship moved very quickly when we found out Beth was pregnant. We were married within about 6 months on Valentine’s Day.

So here we are teenagers with a baby. We knew this was going to be an uphill battle and although I don’t remember anyone saying to me that this was crazy, I’m sure most people thought this was going to end badly. I had been considered a procrastinator up till this time but now I was determined not to fail. I had a wife and child. We decided that Beth could baby sit during the day for parents working and we would not have the expense of our own daycare. One day a lady was cleaning the house Beth was babysitting at and the lady told Beth how much money she could make cleaning houses. By this point our son Steve was starting school and Beth started cleaning houses. Remember, I was managing a Marriott restaurant, I took this job because I was told that if I went through Marriott training that I could run my own business and this is what I wanted. After about 3 years managing, Beth and I joined forces, this was the beginning of Angelo’s Cleaning. I still remember my dad’s reaction when I told him that we were going to start cleaning carpets. He said something to the effect of your crazy, people don’t clean their carpets and you have a family to support. It’s true that dad had never cleaned his carpets before. Although my family history has a lot of small business owners, dad’s generation had been convinced college was the way to go and dad did do quite well in the corporate world. Now we are the proud grandparents of 2 granddaughters!

Over time we have added many services and now have 9 vans and 3 locations. We have over 10,000 active customers. I have made training and learning this business a science. Now we’re ready to franchise.

Hope to hear from you soon.

Meet the rest of the Angelo’s Cleaning team

About the Author: Angelo's Carpet Cleaning

How to Order Online

Hours:
Mon-Fri 8-5
Sat 8-1
Phoenixville drop off and pick up 9am-5pm during the week and 8am-1pm on Saturdays. Area Rugs drop off and picked up by appointment only at West Chester & Conshohocken locations.

→ Prepare for our visit

→ Check our great reviews & write your own All numbers ring to all locations for faster service.

❓Do you know someone in need?

HARDSHIP CASES
Angelo’s wants to give back to the local community. Let us know if you or anybody you know, could desperately use our services but can’t afford it. If we have the time and funds available, we will clean the needed items free of charge. We also collect monetary donations which are used to clean for people in need. Contact us or call: 610-935-7557
Page load link
Go to Top